You are here: Home › ANALISYS › Creating a scenario

The main feature of modern business is that the changes are quick and unpredictable. As a result, it is sometimes necessary to make several variations of the report, taking into account several possible alternatives to the value of the data that may affect the final outcome. For this purpose, the scenario method is used. Excel offers the ability to easily add, edit, and delete scenarios. The scenario shows the ability to display alternative business reports.

In Serbian business environment, the exchange rate of € against the Serbian dinar is one of those unpredictable factors that can affect the operating results. Therefore, we will use the scenarios to illustrate the case in which the fluctuation is seen in two months of reporting. When we have made a report, we must add one cell in which the exchange rate will be. We approach the creation of scenarios by positioning on the Data ribbon, then selecting the Scenario option in the What-If Analysis menu. A dialog box called Scenario Manager will open.

This is the window in which we manage scenarios. In it we can see all the previously made scenarios, and options: adding a new scenario (Add), deleting scenarios (Delete), editing the scenario (Edit), merge multiple scenarios into one (Merge), and creating summary reports (Summary). Since, ath the beginning, we don’t have any scenario we will click Add to create one. 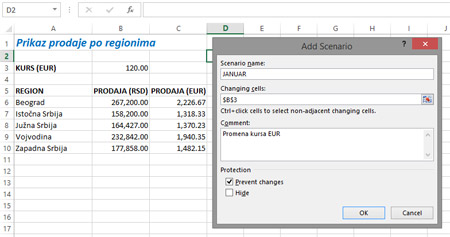 The Add Scenario window will appear on the screen. First of all, we should give a name to the scenario (Scenario Name), and then determine which cell or group of cells will be the subject of changes (Changing Cells). If we want, we can add some short description about scenario in Comment section. When we confirm the input, by clicking OK, a new window will open with the input of the values ​​that should have the cell/cells that we change within the scenario. By clicking OK, we finish the creation of the script, and by clicking Add, we continue to create another scenario. The Add option is here just because more than one scenario is often made, so this can be done much faster. 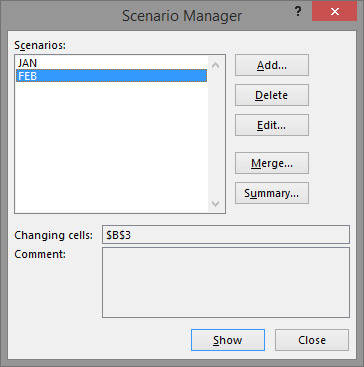